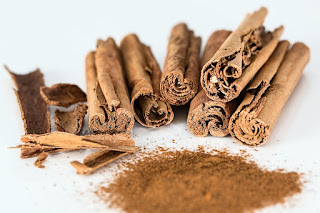 Cinnamon is useful during all seasons, but fall conjures up images of hot cocoa with whipped cream and powdered cinnamon sprinkled on top, or a hot cup of tea with a cinnamon stick. And who can forget cinnamon toast, something my grandmother and mother gave us as children...a little butter, a little sugar, and a little cinnamon sprinkled on the top. At that time, I thought of cinnamon as a seasoning, but studies show us that it is much more.

"We were looking at the effects of common foods on blood sugar; one was the American favorite, apple pie, which is usually spiced with cinnamon. We expected it to be bad. But it helped," he says.