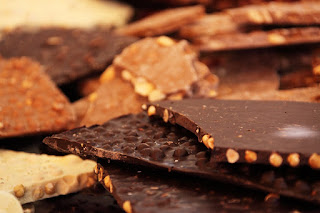 This wonderful, sweet, delicious food is credited for being a comfort food, soothing, and for some, a "guilty pleasure", but should we be feeling guilty? Is your mouth watering as much as mine as you look at the
"If you eat a small portion of dark chocolate each day, you reduce your risk of getting a heart attack or stroke," say US scientists in a study in the Journal of the American College ofNutrition. [I will add that dark means very dark, like baker's chocolate, or the highest percentage of cocoa you can get.  This is also helpful for those of us who are lactose intolerant, as there is less milk in the chocolate].