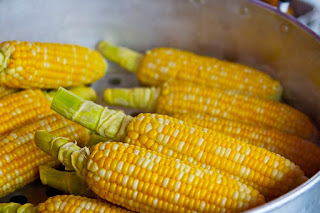 A highlight of every summer in New Jersey is the most delicious corn on the cob in the world.  I'm a little biased, being a New Jersey native all of my live.  We call it simply "Jersey Corn".

Corn is used in so very many ways, that it has become a food that many are allergic or sensitive to.  It is also one of the foods that is more likely than others to contain genetically modified organisms (GMO's).