Nutrition and Health Benefits of Prunes 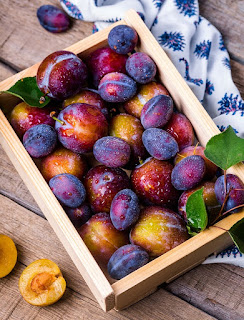 Prunes are a good source of fiber and have long been recognized as a nutrient-rich fruit with multiple health benefits. They are a dried fruit made from the smaller sized variety of plums pictured in the image here.

According to a study from Tufts University in Boston, prunes may also help slow the aging process in both the body and brain. The study ranked the antioxidant value of commonly eaten fruits and vegetables using an analysis called ORAC (Oxygen Radical Absorbency Capacity). Prunes topped the list with more than twice the antioxidant capacity as other high-scoring fruits such as blueberries and raisins.