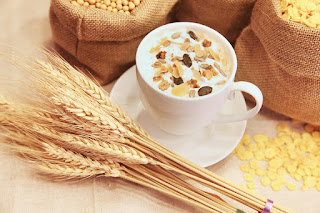 Have you ever made your own bread...not with a bread-maker, though they are a wonderful tool, but with your hands kneading a rich whole-grain dough, letting it rise, kneading some more, then shaping it or putting it in loaf pans to rise again?  This is just one of those wonderful things that were done by our ancestors that should be experienced at least once.  You may find it hard to buy bread in the supermarket again.

Of course grains are the base for bread, and can be eaten in many other forms.  I hope you will enjoy the following article on the health benefits of whole grains.