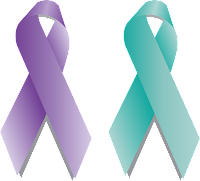 Ovarian Cancer is a disease unique to woman that is often not detected until it has progressed to a point that treatment is not all that one would hope it would be.  I don't believe in hopeless cases, but do believe that we have to be vigilant in caring for ourselves, keeping up with our annual physical and gynecological exams, and doing our part to prevent this disease.  There are promising studies in the medical field that may help doctors be able to detect this disease earlier.  Following is information that I hope will provide you with at least one or two things that you can do to prevent cancer of the ovaries.

One study published back in a November 2007 issue of the International Journal of Cancer suggests that diets high in certain flavonoid compounds found in vegetables, fruits, beans and tea may significantly lower a woman's risk of developing ovarian cancer. If you click the Journal title, it should lead to other articles about Ovarian Cancer from the International Journal of Cancer.