Does an Apple a Day Keep the Doctor Away? 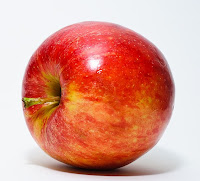 
Apple orchards in our area come to mind in the crisp, cool days of fall, where each apple tree is kept pruned to a height so that visitors can reach many of the apples for picking.  At our local orchards, the most common apples are Macintosh apples, Golden Delicious apples, Delicious apples, Winesap apples, the delicious Honey Crisp apples, and a couple of other varieties.  Not only is apple picking a healthy outdoor experience for the whole family, but the apples contain health benefits, as you will read below. Just make sure you know whether pesticides are used and give them a good cleaning before biting into them. I know that is easier said than done! I usually buy organic apples when I'm not picking, have not yet found a place to pick organic, but it's just once a year when I go and the outdoor fun has it's health benefits too.